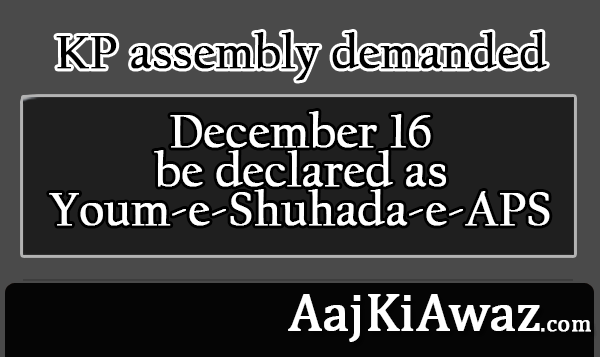 Peshawar: The provincial assembly of Khyber Pakhtunkhwa has unanimously adopted a resolution, calling for the federal government to declare December 16 terrorist attack on Army Public School as Black Day.
In its resolution, the Khyber Pakhtunkhwa assembly demanded that December 16 be declared as Youm-e-Shuhada-e-APS.
At least 150 people, mostly schoolchildren, were killed when Taliban gunmen stormed Army Public School in Peshawar on Dec 16, 2014.
The resolution was presented by Anma Sardar of PML-N and was adopted by the house unanimously

BRT Peshawar to be completed by March 2020, says Shaukat Yousafzai